Next-gen performance cars teased in a distinctive camouflage wrap that all but confirms the continuation of five-cylinder power.

The next-generation 2022 Audi RS3 hatch and sedan have been teased for the first time – and the high-performance compact cars are all but confirmed to continue with turbocharged five-cylinder power.

As part of a wider announcement around Audi Sport and sustainability – including confirmation all Audi Sport models will be electrified by 2030 – a handful of images of the new RS3 hatch and sedan parked alongside their Audi RS range-mates were released, with both vehicles wearing stylised ‘camouflage’ wraps.

While no mechanical specifications were confirmed with the images, the ‘1-2-4-5-3’ branding on the side of each vehicle refers to the cylinder firing order of Audi’s 2.5-litre turbocharged five-cylinder engine, as used in the outgoing RS3 – all but confirming the distinctive engine will return in the new model.

Specific styling details remain obscured by the vehicles’ wraps, though it is clear the new RS3 duo will turn the four-pot S3’s visual aggression up to 11, sharing design cues with the new RS3 LMS including enlarged front air intakes, and even wider wheel arches with brake cooling vents behind the front wheels. 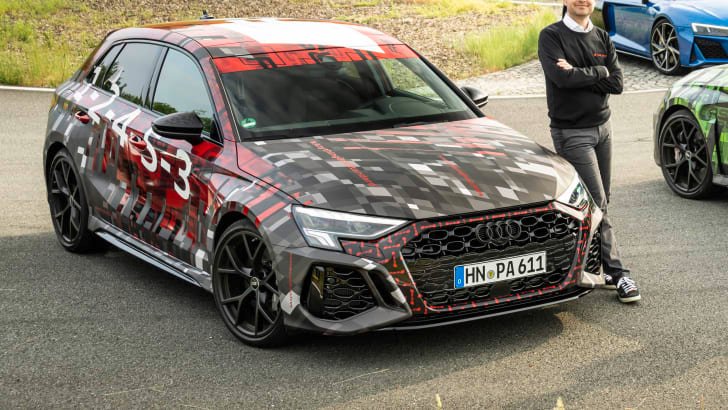 A peek through the camouflaged cars’ windows reveals a three-spoke flat-bottomed steering wheel and a pair of front sports seats similar to those in the new-generation S3.

As reported in-depth by CarAdvice in February, the new RS3 hatch and sedan – previously due for an unveiling in September, though the release of these images suggests it could occur sooner – will opt for an evolutionary, rather than revolutionary approach.

The 2.5-litre turbocharged five-cylinder under the bonnet is rumoured to receive a boost to 309kW and 500Nm – all but matching the rival Mercedes-AMG A45 S’s 310kW/500Nm – paired to a seven-speed dual-clutch auto and a trick torque-vectoring all-wheel drive system shared with the Volkswagen Golf R. 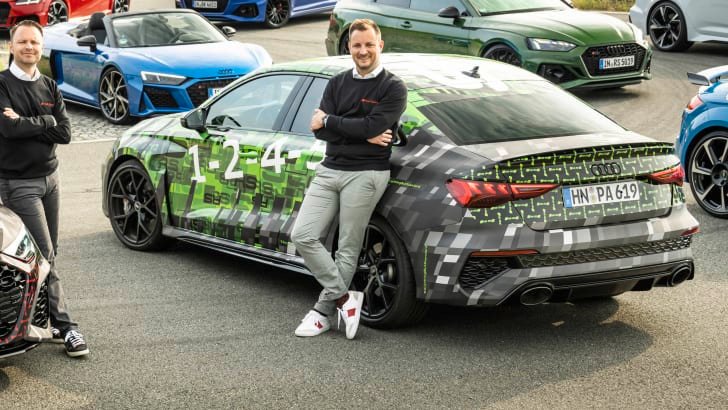 The performance boost – which will see the RS3 duo outgun the new RS Q3 performance SUVs, as per previous RS3 and RS Q3 generations – should enable an official 0-100km/h time under four seconds (though Audi’s performance claims are notoriously conservative).

The release of the above photos formed part of a wider announcement around Audi Sport’s electrification plans, with the brand confirming 50 per cent of its S and RS range will use plug-in hybrid or all-electric power as early as 2024, increasing to up to 80 per cent by 2026, and 100 per cent by 2030.

Leading that transition is slated to be both plug-in hybrid and all-electric versions of the next-generation RS4, as reported last month.

The 2022 Audi RS3 hatch and sedan are expected to be unveiled in the coming months. Stay tuned to CarAdvice for all the latest.

Below: CarAdvice’s interpretation of the new Audi RS3’s styling, published back in February 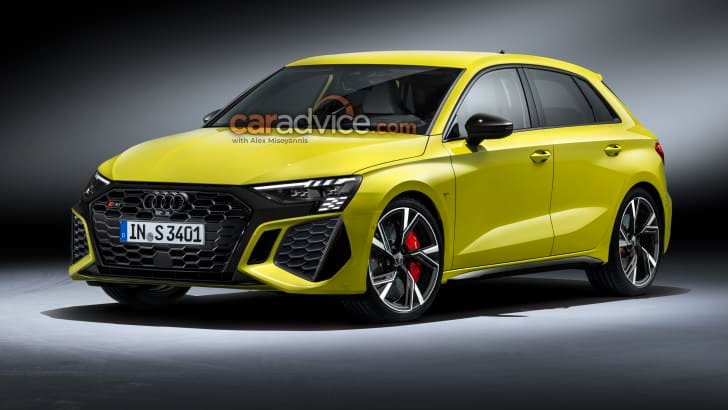 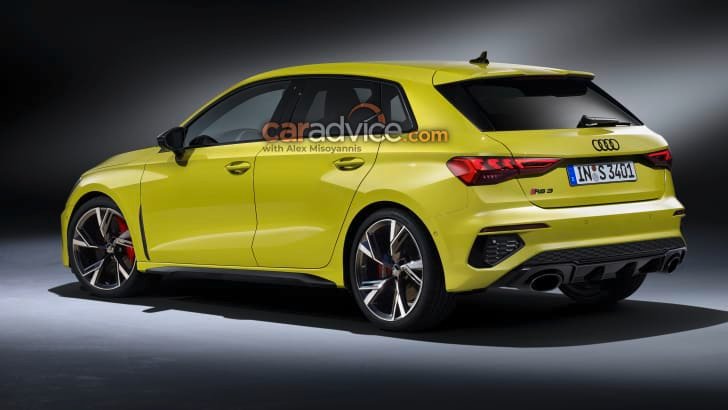